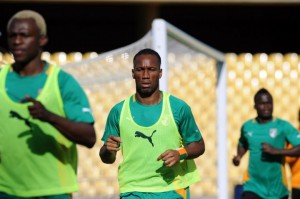 Elephants are treating their Afcon quarter-final against fellow heavyweights Nigeria like a title match as the tournament favourites bid to end a decade of disappointment.

The West African giants set up Sunday’s clash in Rustenburg after the Ivorians topped Group D, while Nigeria finished second in Group C.

“This match against Nigeria will be like another final,” defender Kolo Toure said after Ivory Coast drew 2-2 in their last group match against Algeria on Wednesday.

“Nigeria is a top team, they have great players. We know it’s going to be a very, very tough game. We need to concentrate, try not to make too many mistakes.”

“If we believe in ourselves, I think we can do it.”

For a fifth successive tournament, the Elephants are favourites to win the title but Africa’s top-ranked team have failed to live up to expectations on the four previous occasions.

“Winning this tournament would be massive for us. We’ve been waiting some 10 years to do this, so this would be a huge achievement,” Toure added.

“We are just praying and doing our best on the pitch like we did for the first three games. But everything is in the hands of God and we just hope that this time will be our time.”

Older members of the nation’s exalted generation like Didier Drogba, Kolo Toure, Didier Zokora and Emmanuel Eboue are making one last realistic attempt to win the trophy that has eluded the country since 1992.

They struggled in their first match of the tournament when they edged Togo 2-1 but have since shown all the qualities of a title-winning team, beating Tunisia 3-0 and drawing against Africa’s second-ranked team, Algeria.

Even captain Drogba displayed glimpses of his old powerful self in the final group match, his perseverance paying off as he steered home a header.

The 34-year-old striker had been dropped for the previous game but was restored to the side on Wednesday as he sought more game time to improve his fitness.

“It’s going to be hard and tough. Everybody knows how good he is and what he did with Chelsea in the Champions League final. It was great. He was one of our best players and now I am playing against him,” Drogba said of the Nigerian midfielder.

“We are going to laugh before the game, be tough with each other during the game and then laugh again after because we are good friends. He is my brother.”

The Nigerians are preparing for a different type of game compared to their group matches and Mikel said he hoped for an energy-charged encounter.

“It’ll be a pressure game, the kind of game you like playing,” he said after his team beat Ethiopia to qualify for the next round. “It will be tough, but hopefully it’s one that if we play well, we will win.”