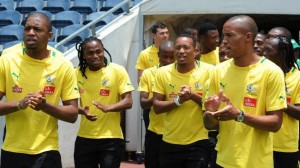 Bafana Bafana returned to serious training last Tuesday after being given a day off on Monday with the good news that striker Lehlohonolo Majoro is fit to return for the quarter-final match against Mali on Saturday. The match is scheduled for a sold out Moses Mabhida Stadium.

South Africa booked their place in the last eight following a dramatic encounter against Morocco on Sunday, 27 January that ended in a 2-2 draw.

Two quarterfinal match-ups were decided in the 2013 Africa Cup of Nations (Afcon) in Durban and Port Elizabeth on Monday, with Ghana and Mali progressing from Group B to the knockout stages of the tournament.

Majoro sustained a shin injury in South Africa’s 2-0 win over Angola and will train alone until Thursday.

Mali conceded a penalty in the first minute of their showdown with the DRC and found themselves behind almost before any players could break a sweat, but truth be told they had the better of the game and deserved to advance.

Eagles’ coach Patrice Carteron praised the Leopards after the contest, saying: “We are happy to have qualified for the quarterfinals. We played a difficult game against a difficult team. They have a good team and a good coach.”

Looking ahead, he said: “Our next match is against South Africa. That will be another tough game for us but I believe that pressure will be on them on Saturday. This stadium (Moses Mabhida) will be full with all the supporters of South Africa, but we will do our best.”

“Everything happens for a reason. Anele is not available for our next match, Gaxa has been working hard at training and now his opportunity has arrived. Maybe he is the right player for this match; even if Anele was available I think I would have used Gaxa. I think things were meant to happen this way,” said Bafana Bafana head coach Gordon Igesund. 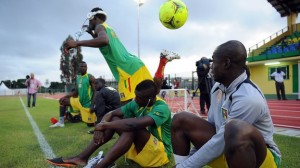 “We are two games away from the final, the players understand where we are and we all know there is a huge challenge that lies ahead of us. We know what we have to do. When you get this far in any competition, you are self motivated but at the same time it gets tougher. Mali is a very talented team with very hard working players,” added Igesund.

“They play differently to most teams we have faced; they like to slow things down. They knock the ball around and are very comfortable on the ball, but then again there are no easy games in the quarter-finals.”