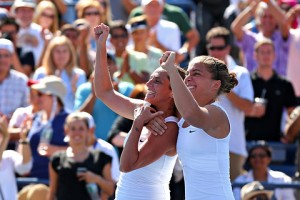 Sara Errani and Roberta Vinci were victorious in their doubles opener at the BNP Paribas Open on Thursday.

No.1 seeds Sara Errani and Roberta Vinci cruised into the second round of the BNP Paribas Open with a routine defeat of Darija Jurak and Katalin Marosi on Thursday.

Errani and Vinci are at 15 wins in a row and counting following their 63 62 triumph, which also made them 3-0 all-time versus Jurak and Marosi without having dropped a set. They also improved to 19-2 on the year, having reeled off titles at the Australian Open, Paris (Indoors) and Doha during their streak.

“Everything is going well this year,” Vinci said. “We have won a lot of tournaments. We are No.1 in the world. We are happy off the court.”

“Jurak and Marosi played well today, but we played better. We will see what happens the rest of this tournament, but we are definitely confident.”