So it’s almost the holidays in Western Europe, in the East, it is the beginning of the championships. It was played on Sunday, the first day of the championship in Iceland. The Togolese Farid Zato and his club Vinkingur Olafsvik have lost at home to FRAM (1-2). 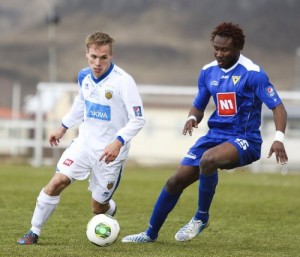 The former player of Dynamic Togolais (first division club in Togo) played the entire game, but could not prevent the defeat of his training promoted this season. According to the player, leaders rely on maintenance before seeing the next few years if they will play the leading roles. Only three matches were played. The title holder, FH enters the arena this Monday facing Keflavik.

Here is the rest of the results and the program of the other games: