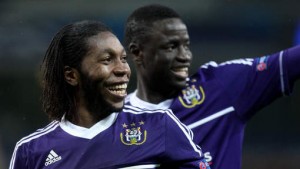 Anderlecht won on Sunday their 32th title of champion of Belgium. Thanks to its 1-1 draw against its direct competitor for the title of Zulte Wagerem of the Senegalese Mbaye Leye, sacred “Ebony Shoe.”

It all started badly for the Mallows who conceded a goal after the break by Naessens. But Biglia quickly equalized. Nothing could be achieved. Despite the expulsion at 10 minutes to the end of the Senegalese Cheikhou Kouyaté.

Dieumerci Mbokani can now enjoy and seek for his next destination.