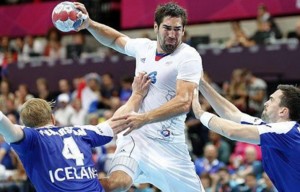 After Neymar in soccer, Barcelona gets another sporting monster. The Barça handball section announces the signing of Nikola Karabatic (rear left and center-half).

The French, European, Olympic and world Champion, pushed out in Montpellier, finished the season in Aix-en-Provence, which he joined in February (12 games, 73 goals).

Nikola Karabatic (29 years) will be presented on Wednesday (10:30) in Barcelona.