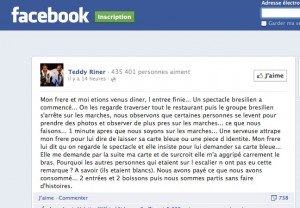 The case caused a stir! The star of the French judo, Teddy Riner revealed on his Facebook page that he was victim of racism during a night out with his brother in a Parisian bar – The Buddha Bar

Here is his story: “My brother and I had come to dine, after entering, a Brazilian show began, says the French Olympic champion. (…) We see that some people get up to take pictures and take a closer look on the steps … what we do … 1 minute after that we are on the steps, a waitress grabbed my brother to tell him to leave his card blue or identity (…) she asked me after my card and in addition she grabbed my arm squarely. Why are other people 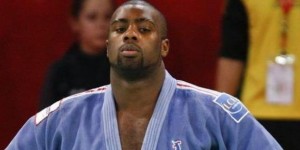 who were on the stairs not noticed? We wondered (they were white). We paid what we consumed … 2 inputs and 2 drinks and we left without fuss. “

The team reports that Lawrence Guyot, who is in charge of the communication of the bar just apologize via Twitter: “Dear @ teddyriner, incorrect barmaid layoff date. Sincere apologies from Buddha-Bar which condemns racism. “
FIFA fights engaged against racism!