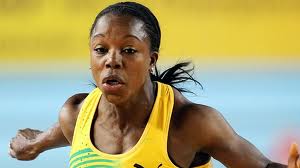 The Jamaican Veronica Campbell-Brown, World 200 m Champion has been provisionally suspended from competition after a positive test for a banned substance on May 4.
Her management company said she would seek to clear her name, adding “Veronica is not a cheat”.
The Government Body said: “The Jamaican Athletics Administrative Association can now confirm that a case concerning Mrs Veronica Campbell-Brown is currently ongoing,”
“She has been provisionally suspended from competition awaiting the outcome of a disciplinary panel that will be empanelled to hear this case.”
Her management company said that the charges were a shock to her and her supporters. And also that she will begin the process of clearing her name.