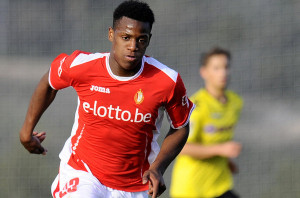 Michy Batshuayi has extended his contract until 2018 with Standard. Very courted by Swansea, the Belgo-Congolese did not want to join the Premier League and chose instead to continue the adventure in Jupiler Pro League with Standard Liege.
In the columns of the Belgian newspaper DH, the 19-year-old striker of DRC explains the reasons that led him to extend with the club from Liege rather than opting for the Premier League:
“In my mind, I always wanted to stay at Standard. I’m glad all that is behind me. I can now focus on sports. I’ll then be a player of Standard until the end of the season. “
“I want to win titles with Standard and be included in the list of top scorers. “