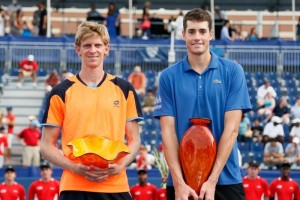 Kevin Anderson (orange T-shirt) was about to win his third title on the ATP Tour. In the final of the tournament in Atlanta on Sunday, the South African bowed by two sets to one against the American John Isner in a duel of sluggers and giants (2.06 m for Isner and 2.01 m for Anderson).