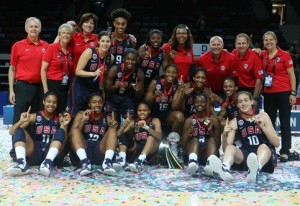 As in Eurobasket, Valerian Ayayi will have to settle for the runner-up title at the World U-19.

The Bleuettes did not take the comparison against the USA in Sunday’s final of the World Cup. In her first final of a World Championship U19, France has been upgraded by the U.S. 61-28.

This is the fifth consecutive time that the United States were crowned world champions in this age group.