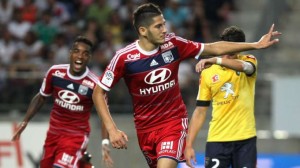 Quickly led to the score, Lyon confirmed its offensive potential to turn things around and win at Sochaux (1-3) in the opening of the second day of League 1. Yassine Benzia opened his goal count in L1. The Franco-Algerian was the author of the equalizing goal of the Rhone club. The Lyon striker did not hide his joy after the match.

“Score, it’s good for statistics and the team, enjoys Yassine Benzia. But it is above all the team and I’m very happy. We came to take the three points. Alex (Lacazette) has the ability to play right, and as for me, I’m more of an axis player but I can play anywhere forward, the coach told me. As our agreement with Alex is good, we thought we could switch to a point. We have done it very well. It is good for us. The goal came from a nice pass from Clement (Attic). I make a call-cons call. This goal makes me feel good and allows me to find a good feeling. We started badly but then we had the control of the game after the third goal, we have a little walked down but we are leaving with the victory”.