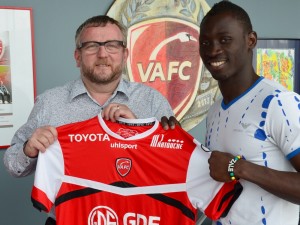 As announced by the Yankee club since the end of last week, Saliou Ciss actually signed for Valenciennes on Monday.

The Senegalese defender signed for four years from the Norwegian club, Tromso. He told the website of Valenciennes.

“I am very pleased to have signed in Valenciennes. Now I want to show what I can do and for that, I must redouble my efforts. After playing in the Norwegian championship and discovered the Europa League, League 1 is a new step for me. In the workforce, I know Abdou Camara with whom I played in the junior national team. With his support, I think I will adapt as quickly as possible”.

“I’m Left, but I also played a lot in the axis and sometimes right in Tromso. In defense, I can play everywhere except in goal! “