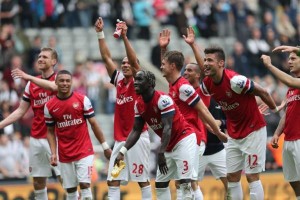 Arsenals qualified to the next round of the UEFA Champions league after scoring Turkish home and away. The Turkish visitors trailed 3-0 after the first leg of the play-off and went further behind when Ramsey finished from close range after Lukas Podolski’s through ball was deflected to him.
Gunners keeper Wojciech Szczesny tipped Emmanuel Emenike’s shot onto the post.
But Ramsey grabbed a second when he volleyed in Kieran Gibbs’ cross. Theo Walcott hit the crossbar with a free-kick as Arsenal strolled through, with the only concern for boss Arsene Wenger a hamstring injury which will keep Podolski out for three weeks. England midfielder Jack Wilshere also looked uncomfortable after receiving a late kick on the ankle but finished the game.
Otherwise, once Ramsey added to his goal in the first leg, it was a relatively straightforward evening in front of an under-capacity crowd at the Emirates Stadium.  Following Arsenals defeat to Aston Villa, th is was the gunners third successive win and will inject fresh confidence to the players as they play Tottenham on sunday.