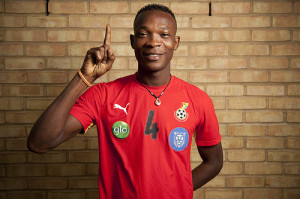 Black Stars player John Paintsil has admitted that his wife saga has dearly affected  his football carrier. The defender allegedly assaulted his wife on his return from the 2012 African cup of nations. According to the defender, the ghanaian media were not fair to him as they publicise wrong information and it has caused his proffessional carrier.
The 30-year-old, who is still searching for a new club after leaving Israeli side Hapoel Tel Aviv in June, has been unable to secure a new deal since the incident. “The story about me stabbing my wife which was not true has caused my job as a professional footballer, all the teams that wanted to sign me have refused due to this incident. What happened was my wife took my passport to my neighbours house to keep it after we had some misunderstanding which is normal with married couples“.
“So they kept my passport for two weeks whiles my club in Israel was waiting for me, the club called me to come and I told them I couldn’t find my passport so they went ahead to get a new player which when I finally got back there was no place for me“, he said on Metro TV’s magazine show Morning Ride.
Even though John Painstil impressed on trial at English Championship side Millwall recently he was not handed a contract.