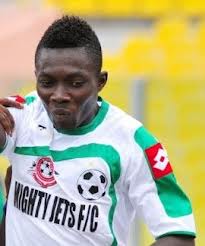 Taminu Muntari sets the first record in the 2013/2014 Ghana premier league by scoring the first goal of the league. This year’s league really promises to be one of the most competitive leagues because the first half ended goalless draw in all the league centres except Accra sports stadium where Taminu scored as early as 8th minute in the game.
The former Wa Allstars player used his former club to set this record.he played for Wa  Allstars on loan last season and was released before the transfer window shut.
Even though his goal couldn’t earn all the three points for his club as the game ended 1-1, his name will be in the 2013/2014 Ghana Premier league book of record that he scored the first goal of the tournament.