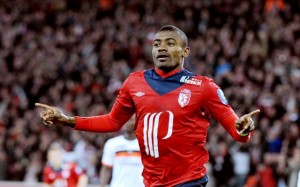 For those who are very fond of statistics, here’s one that will make you happy (or not). Salomon Kalou is at the same level as Zlatan Ibrahimovic in League 1. This is what reveals Opta Jean.

Indeed, with his goal on Tuesday against Evian Thonon Gaillard (3-0, Lille’s Ivorian striker scored his 14th goal of the calendar year. It is the same number as Zlatan Ibrahimovic.

Kalou has scored two goals this season (scoring from the penalty spot against St. (Etienne). Also the same number displayed by the Swedes. Since his return from the Afcon 2013, the former Blues took on a new dimension with the Danes. At a point to consign to oblivion the many rumors of departure.

But this can change tonight. Zlatan and PSG are facing Valenciennes for the 7th day of League 1. He probably wants to celebrate in the most beautiful way his contract extension with the Paris Club.