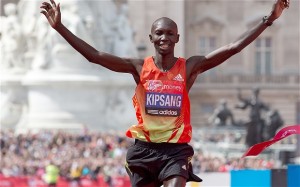 Wilson Kipsang clears shelves of the world marathon record of Partick Makau. The 31 years Kenyan brought the new reference time 2 h 03 min 23 this Sunday at the 40th Berlin Marathon. He improves with 15 seconds the old clock. A time that was set in 2011 by his fellow Makau (2h03’38”) already at the Berlin Marathon.

Third of the Olympic Games in London, Kispang held before his victory on Sunday, the second largest time of the discipline, a performance achieved during the Frankfurt Marathon in 2h03’41”.

With this new time of 2h03’23” Kipsang Wilson becomes the third Kenyan since 2003 to beat the world record in marathon.