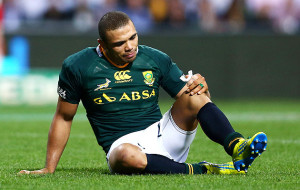 New Zealand remains unbeaten in the Four Nations tournament. The All Blacks have won the competition at the expense of South Africa. New Zealanders have won a sixth success in six matches on Saturday against the Springboks playing at home (27-38). After a committed game and a special beauty, no less than nine trials have been registered.
But the meeting was a bit overshadowed by the injury of Bryan Habana. He was forced to leave the field in the 23rd minute. The South African winger was suffering from a breakdown in the left thigh and was replaced by Serfontein.