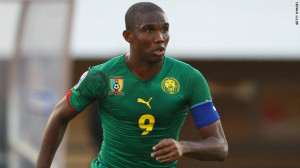 We expected this. It is now official. Samuel Eto’o returned to Cameroon Selection to participate in the qualification of the Indomitable Lions for the 2014 World Cup. The Chelsea striker told he returns to the den on Tuesday after meeting with state officials.

“This evening , I will join my team currently training in Lisses (…) we all have a duty vis-à -vis our country ,” said Eto’o at the end of an audience granted to him on Tuesday at the Palais de l’Unité by the Minister Secretary General of the Presidency of the Republic , reports our colleagues from Camfoot relayed by CRTV national television.

This puts a new end time to the many speculations about the participation of Eto’o in the meeting of 13 October against Tunisia in Rades .

The whole affair occurred last August after the media have relayed a goodbye of the former Barcelona to his teammates after the victory over Libya.