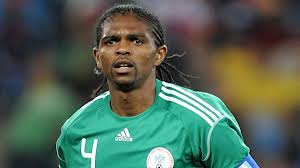 As Africa Top Sports reported to you, the Super Eagles of Nigeria have a 2-1 win over Ethiopia in the preparations of the 2014 world cup.
According to the former captain of Nigeria Nwankwo Kanu, the Super Eagles second half performance showed that they wanted a victory more than Ethiopia as reported by our fellows of Kickoffnigeria.com.
In fact the Eagles began the second half with more energy and determination that led them to a 2-1 win.
“I have to congratulate (Stephen) Keshi and the team,” Kanu said.
“In the first half we were not in the game, but in the second half we showed that we wanted it more.”
As a striker himself, Kanu reserved special praise for two-goal hero Emmanuel Emenike and says the Super Eagles now need to work harder.
“Well done to Emenike. He was my Man-of-the-Match. Halfway to Brazil.
“Let’s go home and correct our mistakes and fight more and God will see us through,” he added.