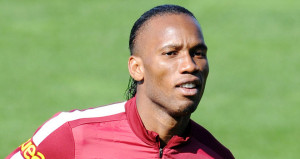 Africa Top Sport just reported on the more or less shaking Uefa Champions League knockout draw made on Monday in Switzerland.
Drawn to take on former boss Jose Mourinho of Chelsea in the knockout stage of the Uefa Champions League, Galatasaray star striker Didier Drogba says both sides are his homes and believes he is the luckiest man in the competition.
He expressed his happiness via Instagram: “ What a draw. I’m the luckiest man in this competition, in both games I’ll be playing home.”

The Ivorian superstar who scored the winning penalty in Chelsea’s Champions League triumph against Bayern in 2012 is still worshipped by the Stamford Bridge fans and Mourinho wishes the return of the superstar in the Blues.
Drogba is still the record holder for Chelsea when it comes to goals scored in Europe, with 34 goals in 69 games.