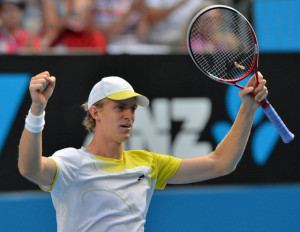 After his marathon match in the previous round, it is in an express mode that Kevin Anderson faced Austrian Dominic Thiem Wednesday. The South African (21st ATP) spent 1 hour 46 minutes on court with No. 6 to hook his straight sets (6/4, 6/3, 6/4) win.

He will play a knockout stage game against Edouard Roger-Vasselin, the world’s 40th, who struggled again in five sets to reach the third round.

If he edges the Frenchman, Kevin Anderson could meet Tomas Berdych who is set to clash Bosnian Damir  Dzumhur qualified for the third round after getting rid of Croatian Ivan Dodic in the fourth set (4/6, 4/6, 6 / 3, 4-1).

We also note the qualification of the titleholder Novak Djokovic. The World No. 2 dominated Argentine Leonardo Mayer 6/0, 6/4, 6/4.