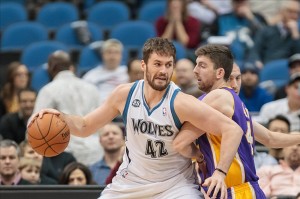 Only four floors were active in the night of Tuesday to Wednesday in the NBA. After their defeat the day before, Joakim Noah and the Bulls rallied in Phoenix. Returns league veteran Steve Nash (39) and Steve Blake have not changed the situation of the Lakers. Golden State has been beaten by the Cats. The Pacers put an end to their 12 consecutive losses at Philips Arena.

The return of Steve Nash and Steve Blake has not improved the performance of the Los Angeles Lakers. For the 32nd time this season, the crew of Mike D’ Antoni ends a match in defeat – in – 48 outputs. Led by Kevin Martin and Kevin Love, 63 points combined, Minnesota dominated the Lakers, 109-99, and returns to equilibrium (24v – 24d). the Angelinos defense has been their Achilles tendon. For the 15th time this season, they concede 100 points to an opponent, the first time since 1986-1987. Suddenly the offensive contribution of the bench (66 points including 24 for Nick Young) does not weigh very heavy. Steve Nash for his return issued nine assists and recorded seven points. Author of his 25th career game with 30 points and 25 rebounds, Kevin Love (31 pts, 17 rebounds tonight ) clears the on the shelves of the franchise the game record of 30 points and 25 rebounds from Kevin Garnett. He leads the league this season with his seventh double-double in the same stat. Wolves put an end to 11 game losing streak against the Lakers at Target Center. Gorgui Dieng (4 pts, 3 rebounds and 10 to the evaluation) and Luc Mbah a Moute (4 pts, 3rbds ) also contributed to end this series.

The Pacers put an end to their curse at the Philips Arena. Beaten in their last 12 regular season games in the room of Hawks, Indiana has found the flaw that night (85-89). Paul George (18 pts in 6/16 shooting) down regime, David West was responsible for taking over with 22 points to 10 /19 and 10 rebounds. Teammates Ian Mahinmi (2 pts, 2 rebounds) took advantage of the empty move of Atlanta in the third quarter time (24, 12) to win this game. 4 points and 2 assists off the bench for the Hawks rookie, Dennis Schröder.