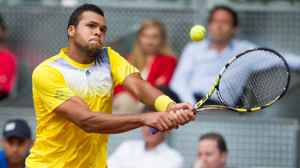 Relying on his return of serve, Tsonga won the first round in half an hour. But in the second set, he quickly made a breaker and was led 5-0 by his compatriot. Returned to 5-4 in the following serve, seeded No. 11 sends the ball into the net on the right hit and the 47-ranked Roger-Vasselin wins the set. A break on the first serve of his opponent was enough to win the final set and qualify for the second round.

For a place in the knockouts, Jo-Wilfried Tsonga will have to outclass either Lleyton Hewitt or Girlado Santiago.