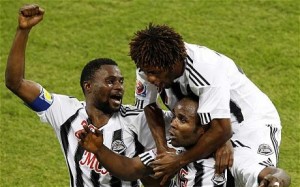 Overtaken by their rival AS Vita Club, TP Mazembe made a very good operation Wednesday by taking the top spot in the National Football League (Linafoot) at a day of the end of the championship. This, thanks to their victory over Don Bosco CS 4-0. It was during the fifth day of the play-offs.

The Ravens now have 10 points against 9 points for AS Vita Club who were defeated by SM Sanga Balende. Until the fourth day, the CVSA had yet managed to consolidate their lead by remaining stuck to the top spot of the league ranking. With their victory, Balende rank third in the standings.

The last day of the playoffs will be played Sunday in Kinshasa between Vita Club and TP Mazembe and in Lubumbashi between Don Bosco and SM Sanga Balende.

The title race looks extremely fierce in the country of Dieumerci Mbokani.