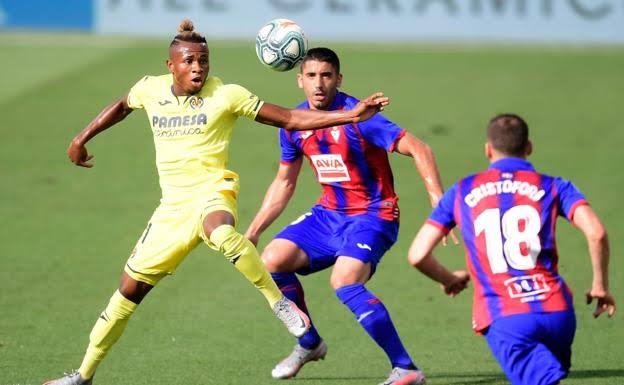 Samuel Chukwueze was in action for Villarreal who got their first La Liga win of the season after a 2-1 comeback against Eibar.

Chukwueze was handed a starting XI place by Unai Emery following his performance in the opening game against Huesca.

The winger didn’t disappoint as he provided an assist for Gerard Moreno to drew Vilarreal leveled in the 63rd minute.

Villarreal got off to an impressive start as Moreno scored in the 9th minute but the goal was ruled for an offside.

After a goalless first half, Eibar took the lead five minutes after the second half resumed.

Villarreal struggled to convert their chances until Chukwueze played Moreno through to level in the 63rd minute.

Seven minutes later, Paco Alcacer scored what turned out to be the winning goal.

However, Chukwueze didn’t complete the game as he was substituted out for Manuel Trigueros in the 85th minute.

The win was the Yellow Submarines’ first of the season.

Speaking after the game, Emery in his post-match conference said there is need to improve defensively.

The former Arsenal manager also praised his players for their their dogged fight.

He said, “Our reaction to Eibar’s goal was very important.

“We also had a good response against Huesca.

“It was a tough test where we had chances and even goals ruled out by VAR.

“That’s a sign that we’re doing things well, but we need to peak in the final third.”

On areas the team needed to improve, the Spaniard said, “We played well enough to win and gain confidence but there are aspects of our game where we need to continue to grow.

” In defence, there are situations which we need to work on and stop from happening.

“In attack, we want to continue showing the playing style we want to impose.”

Having played two games at the Estadio De la Ceramic, Villarreal will travel to Camp Nou next weekend to face Barcelona.