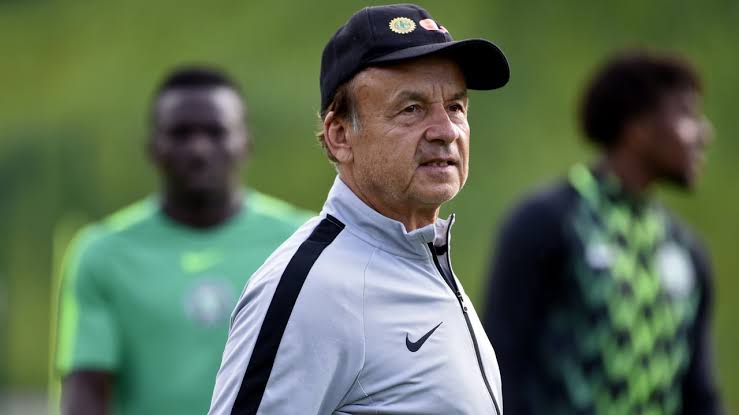 Super Eagles head coach Gernot Rohr is confident his team have the quality to qualify for the 2022 FIFA World Cup in Qatar irrespective of the opponent they face.

With two months away from the start of the second phase of the Qatar 2022 World Cup qualifier, Rohr spoke with www.FIFA.com about his desire to get Nigeria to Qatar.

The Franco-German talked about how he hope to get the three-time Africa champions to reach the quarter -final of the tournament in Qatar.

He also reflected on how the team failed to progress to the knock out stage at the 2018 World Cup in Russia.

On the Qatar 2022 qualifier where Nigeria will face Liberia, Cape Verde and Central African Republic, the Franco-German gaffer said he respects all his opponents.

“We have three opponents in the group and have to respect all of them.

“Liberia are a team that can’t be underestimated as we saw when we beat them in a friendly.

“As for Cape Verde, they have players of Portuguese and Brazilian origin, and they can beat any team.

“Central African Republic are an unknown quantity for us, which makes it more difficult.

“I think the group is tough, but we believe in our capabilities.

“Given that we qualified from the group of death for Russia 2018, we’re confident we can make it this time as well.”

Asked if he will hope to avoid top teams like Algeria and Senegal en route the road to Qatar 2020, Rohr said he is not afraid to face any team.

“There will be fierce competition regardless, but when we play without fans we’ll miss the excitement.

“I hope fans can attend games next year as this will make the matches more enjoyable.”

After failing to guide Nigeria past the group stage, Rohr is targeting knockout stage qualification for the Super Eagles come 2022.

He is also confident of a quarter-final berth which has been the highest stage the Super have reached in the World Cup.

“We’ll take it one step at a time.

“First we need to qualify, and if we do that, we’ll look at our group at the finals.

“We’ll try to progress to the knockout stage, which we got very close to two years ago.

“We have to work hard to achieve that.”

The Super Eagles missed out reaching the knockout stage in Russia 2018 losing 2-1 to perennial opponent, Argentina in the last group game.

Reflecting on the performance of his team which was one of the youngest team of the tournament, Rihr said they deserved to have reached the knockout stage.

“Yes, we deserved to qualify.

“We played very well particularly against Iceland, and we had a goalkeeper who was only 18.

“Against Argentina, we needed a few more minutes to hit back [after their late goal], and small details made the difference in the end.

“We almost got a second penalty, but VAR denied it.

“What we did in Russia was very encouraging nonetheless.”

“You’ll get the answer if you look at FIFA Ranking.

“I think the top five teams in the Ranking will make it.”

With contact sports yet to resume in Nigeria due to the outbreak of COVID-19, Rohr revealed how he has been in touch with his players.

“We’re in constant communication with the players, the technical staff, the trainers, the video analyst, and all the coaching staff.

“Every week we see the players and travel sometimes to meet them as well.

“Recently, I visited [Kevin] Akpoguma, who plays for Hoffenheim.

“He made the decision to play for Nigeria after representing Germany at youth level.

“I also keep in touch with Nigerian football officials, with whom I successfully negotiated a contract extension until Qatar 2022, on the condition that we qualify.

“It’s definitely been a unique period.”

On his final message about the coronavirus pandemic, Rohr hoped life will go back to normal .

“I hope all the players and fans stay healthy and safe.

“I also hope life will go back to normal so that fans can travel and attend matches, which will in turn bring football back to life.”

Rohr will return to the dugout for the first time in October 9 when the Super Eagles play Algeria in Austria.

Then he will also oversee the game against Tunisia at the same venue on October 13.

Since he took over as Super Eagles coach, Rohr has undoubtedly proven to be the best man for the national team.

Apart from guiding Nigeria to the Russia 2018 World Cup in a group of death and a bronze medal at the 2019 Africa Nations Cup,

Nigeria have continued to soar high in the FIFA Coca-Cola ranking and the recent one saw the moved to 29th place in the world after seven years.