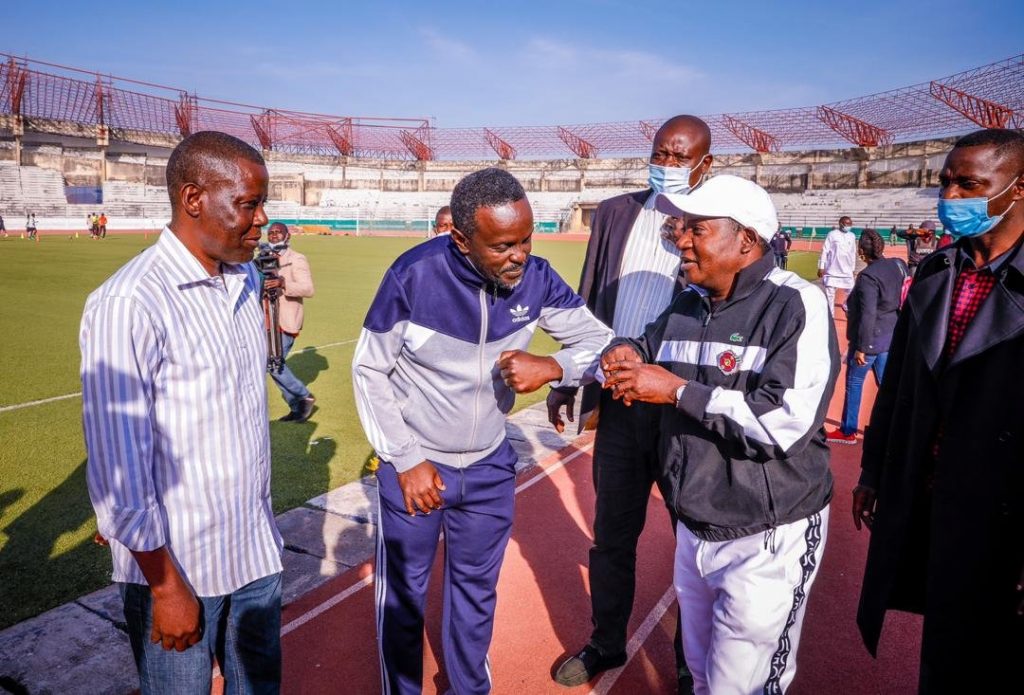 Plateau United has received a major boost from the State Governor Simon Lalong ahead of the of the CAF Champions League preliminary match against Simba SC football club of Tanzania.

The governor visited the team on Weenesday during their training ahead of the game and promised that the will receive both moral and logistic supports ahead of the game.
While addressing the players and technical team, Governor Lalong said he was at the stadium to ascertain their level of preparations and also encourage them to put in their best for a victory come sunday.
“I am here first of all to congratulate you for winning the Nigerian Premier League for the second time which qualifies you to represent Nigeria at the CAF champions League.
“I have no doubt that you will bring home the trophy having leant from the mistakes of the past and made serious improvements” he said.
Lalong said the team has all it takes to win the match on Sunday and eventually go ahead to win the tournament.
He promised that the State Government will provide all moral and logistics support to the team to ensure they are motivated to perform well.
Governor Lalong assured the team that a new bus will be delivered to the team this week to enhance their comfort and movement.
He promised to be personally present at the stadium to cheer up the team to victory.
Reacting to the governor’s kind gesture, General Manager of @PlateauUnited Mr. Pius Henwan informed the Governor that the team has been vigorously training for the match and was ready to put in their very best in the CAF champions league and the national league.
He said the Government’s gesture to the club has been a great booster that has seen them make progress over time.
He also appealed for intervention of the Governor in getting some fans to witness the match in line with the COVID-19 protocols.
On his part, head Coach of Plateau United Abdul Maikaba described the Governor’s visit as a tonic that will motivate them for victory.
He appreciated the intervention of the Governor at various times towards improving the welfare of the team.
He said Plateau United is the only team in Nigeria that receives salaries regularly and before the end of the month.
The Governor in company of his Chief of Staff Noel Donjur and the Commissioner for Sport Victor Lapan inspected renovation work at the dressing rooms and conveniences in the stadium.