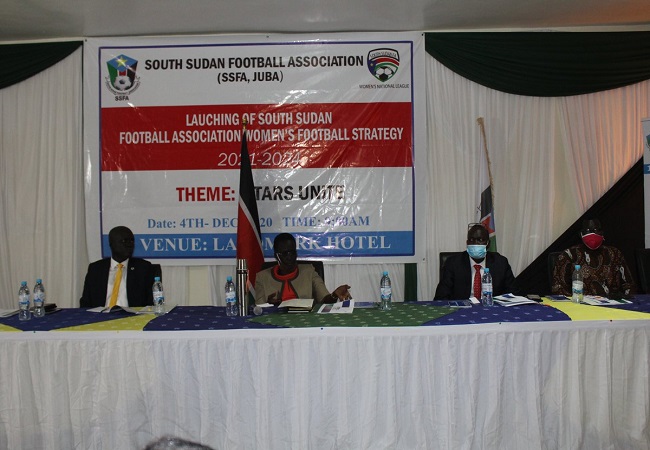 The South Sudan Football Association (SSFA) launched on Friday a four-year women’s football strategy. This is to build an inclusive and sustainable future for the women’s game in the country.

The development comes eight years after the country became the 209th member of Fifa. And a year after playing its first women’s international game at the 2019 Cecafa Women’s Cup in Tanzania.

Following in the footsteps of Morocco and Algeria, the East-Central Africans become the latest nation on the continent to roll out a long-term plan for the women’s game in 2020.

Prior to Friday’s launching of the strategy, tagged ‘Stars Unite’, SSFA President, Amin Francis opened up on his administration’s lofty intentions with regards to women’s football growth.

“The plan is to include everyone. We want to continue supporting more women in football through training more coaches, referees and also the new women’s national league, due to start in February 2021.” Francis told Fifa.

Helen Tarso Aninyesi, who is the manager of the project, expected to run from 2021 to 2024, said. “We want to show the world that South Sudan is growing in women’s football. We also want to change the mindset of some people who still don’t believe that women can play football.”

Amy Lasu Luate captains the senior women’s team. And also an SSFA Player Ambassador, shared her joy over the move.

“The women’s football strategy is a big step for our country and for us as players. It is going to create a platform for us to showcase our talents here at home and also in other parts of the world.” She said.

On the core project plan, SSFA revealed the main agendas as: “Firstly, to increase the number of female coaches, referees, players and administrators. A series of measures including women-only courses are planned.

“Secondly, increase the number of girls playing football at the grassroots and community level by 70 per cent. Through school festivals and community outreach projects. Currently, there are 5,000 players nationwide.

“Thirdly, launch a national women’s football league. Building an elite player pathway for teams from each region of the country. As well as committing to participate in six international tournaments with the women’s national team. With players provided with central contracts.

“Fourthly, develop a marketing and communications strategy to boost awareness, advocacy and the sport. Using ambassadors from the worlds of sport and music.”