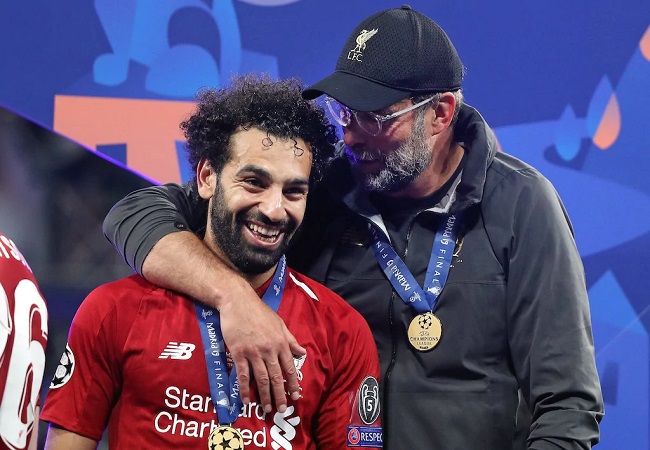 Mohamed Salah became the main topic of discussion of the English footballing scene. As speculations about him leaving Liverpool started increasing. And Liverpool manager, Jurgen Klopp, said that he doesn’t understand why Salah would want to leave Liverpool. And he claimed that only one good reason could motivate his departure.

His interview with Spanish news outlet AS created a lot of controversy. As he didn’t rule out a move to FC Barcelona or Real Madrid, saying that it was all in the club’s hands.

However, Klopp believes that the Egypt international’s answer was normal and expected. And he said he found only one reason for him to want to leave.

“The only reason to leave Liverpool at the moment is the weather. What other reason could there be? This is one of the biggest clubs in the world.” Said Klopp.

“We pay good money. Maybe not the most in the world. But we pay good. We have a sensational stadium with outstanding supporters. We have a fanbase all around the world and our colours are red, which is the nicest colour anyway.

“You cannot force people to stay. But that is it. We never did by the way. It is all about timing, the right moment. We make changes and bring players in. And if a player wants to go then we cannot, probably not hold him back. It’s just that I would not understand why somebody would want to go.

“When Mo answered the question it was that these clubs might be interested. And he didn’t rule that out. If you ask any player in the world who is not playing for Barcelona or Real Madrid if he can imagine playing there one day and he said: ‘No, Spanish football is not for me,’ why should he say that?

“The only thing he said was we shall see and it is in the club’s hands. It is 100% true. And it is about having talks about the future. It is really all fine. Mo is a very important player for me obviously. But this story around is not.”

“That’s my job. To deal with it. So far there has been no problem. I do not see there being a problem in the future.” He added.

During his interview, Salah also expressed his disappointment with not being named captain against Midtjylland. But Klopp explained why he chose Trent Alexander-Arnold.

“I was captain for a long time in my career and I always thought: ‘what a job this is’. Because there are not a lot of benefits and there is a lot of work.” He continued.

“I didn’t feel, or do not feel, the importance of being captain. Before the game I did not realise how important that can be for players. And I didn’t realise how big a story it was for Trent.

“The rule here is we have a players’ committee. The committee is Jordan Henderson, James Milner, Virgil van Dijk and Gini Wijnaldum. These are pretty much the four captains. If they all cannot play, usually it is the guy who is longest in the club.

“And that, how I saw it, was Trent. I don’t mean youth career, but in his professional career. Then somebody told me that on that basis it should have been Divock Origi. So it was my fault.

“Afterwards I spoke to Mo about it. Then I realised it did not work out that well so I clarified it. Obviously he gave the interview. That is not a problem for me. Obviously he was disappointed. I did not do it on purpose. And if I made a mistake then it was not making Divock Origi captain that day.” He concluded.