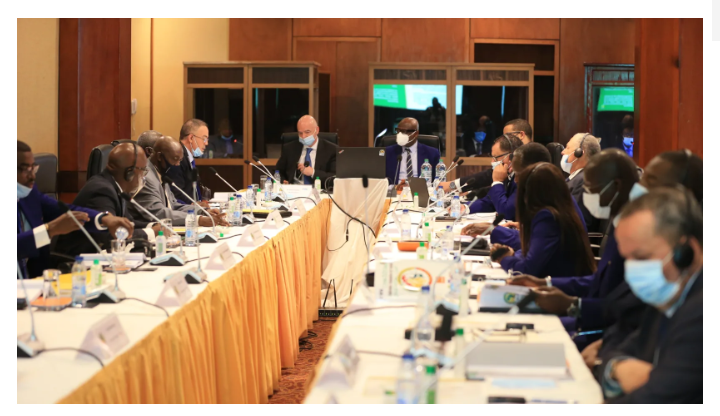 CAF Executive Committee has confirmed that it will submit the candidates for the 2021 CAF President and ex officio names to FIFA Review Committee.

The decision was reached on Friday at the CAF Executive Committee meeting held in Yaounde Cameroon.

The meeting had in attendance FIFA President, Gianni Infantino who arrived Cameroon ahead of the CHAN 2021 opening game on Saturday.

According to a press statement released after the meeting, other issues resolved apart from the CAF Election, is awarding of the 2022 Women’s Africa Cup of Nations to Morocco.

“The CAF Executive Committee held its meeting on Friday, 15 January 2021 in Yaounde, Cameroon.

“In attendance was FIFA President, Gianni Infantino, who is a special guest for the Total African Nations Championship Cameroon 2020.

“A number of decisions were taken on competitions, electoral process and the situation at the Chad Football Federation.”

The Executive committee ratified the decision of the CAF Emergency Committee which states:

“The Governance Committee of CAF shall submit, to the FIFA Review Committee which will perform the eligibility check of the candidatures received for the position of CAF President, considering that CAF President is ex officio FIFA vice-president…

“The Governance Committee of CAF together with the FIFA Review Committee must determine as soon as possible a date for formalizing the final list of all the candidates for all the elections”.

Regarding competition aspects, the Executive Committee decided as follows;

SITUATION OF THE CHAD FOOTBALL FEDERATION

“The Executive Committee recommended the establishment of a joint CAF-FIFA mission, to assist in the formulation of ways out of the crisis between the Chad Football Federation and Government authorities.”