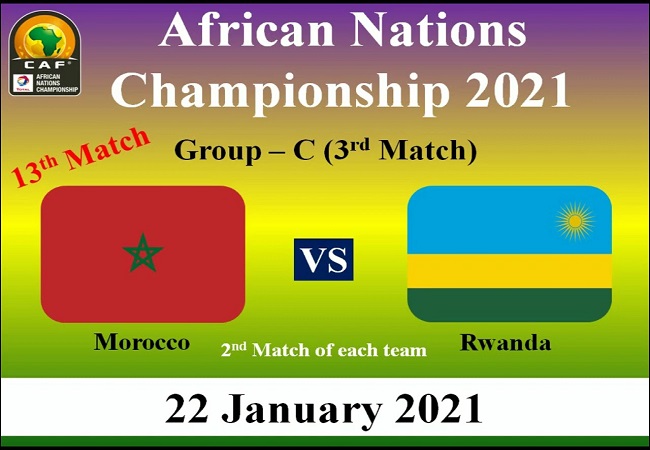 Rwanda will face title holders Morocco in their second Group C game at the ongoing African Nations Championship (CHAN) finals. Game to take place in Douala, Cameroon, on Friday at the 30,000-seater Stade de la Réunification, kick-off 16:00 GMT. And there will be a lot at stake as Amavubi should not make any mistakes.

After slipping to a barren draw against Uganda Cranes in their opener, Amavubi will be looking to upset Morocco – the 2018 winners and one of the main challengers this year – to boost their chances for a place into the quarter-finals.

During a pre-match press conference on Thursday, January 21, head coach Vincent Mashami acknowledged that Morocco are a ‘dangerous side’. But he was confident his players are up for the task.

“It will be a tough game.” Said Mashami. “Morocco have good players who are comfortable and very dangerous in their playing style. They are also strong in set-pieces. But we have studied their game. And we are well-prepared for any situation.”

While Rwanda looks for a vital victory, Morocco started their title defence with a 1-0 win over debutants Togo on Monday. A victory thanks to Yahya Jabrane’s solo goal from the spot.

“Win for us is very important. We will be playing to get all the points. So we have to approach the game as the final.”

Amavubi players go into Friday’s encounter looking to hand Rwanda the first win against Morocco for nearly 13 years. The two sides have since faced-off three times, with Morocco winning twice, while they shared the spoils once.

Since the inaugural CHAN edition in 2009, this is the second time Rwanda and Morocco, and the first since 2016 when the Atlas Lions thrashed Amavubi 4-1 in group stages.

Both Rwanda and Morocco are making their fourth appearance in CHAN finals. And while the latter look to become the first team to retain the title, Mashami’s men are also on a daunting mission of their own. – Being the first East African side to win Africa’s second-biggest football competition.

Ayoub El Kaabi: The striker was the force behind the team’s success as Morocco clinched the 2018 CHAN trophy at home. El Kaabi was the top-scorer with nine goals. He was arguably the best player of the tournament.

After shooting to prominence at the 5th CHAN finals tournament, he went to monetize his talent in China. But he returned to Morocco last year, mainly because of the Covid-19 pandemic.

Walid El Karti: The Wydad Casablanca midfielder is another player to watch out for. His pace, creativity and scoring prowess could cause troubles to Rwandan defenders.

Omar Namsaoui: The celebrated right-back has played several high-level matches. And his experience and leadership in defence will add strength to Morocco’s selection.