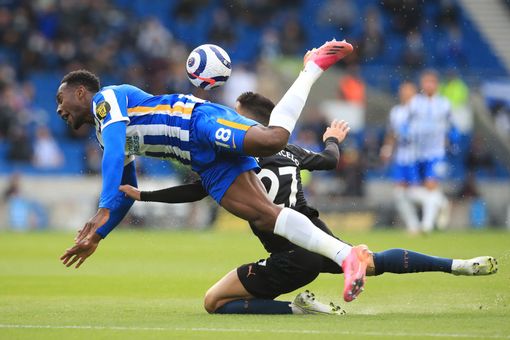 South African forward Percy Tau was on the substitutes bench for Brighton and Hove as they stunned champions Manchester City 3-2 on Tuesday evening.

All seemed good for City as they scored first through Iikay Gundogan in the second minute at Amex Stadium.

However, City suffered a setback as wingback Joao Cancelo was shown  a red card for fouling Danny Welbeck.

Despite the numerical advantage, City doubled the advantage through Phil Foden’s creative piece of individual brilliance.

However, all that was undone by Leandro Trossard who halved the deficit before Adam Webster levelled matters.

Finally, Brighton snatched the winner with 14 minutes left through Dan Burn from a rebound.

Brighton moved to 41 points and up to 15th in the Premier League table whereas City remain top on 83 points.