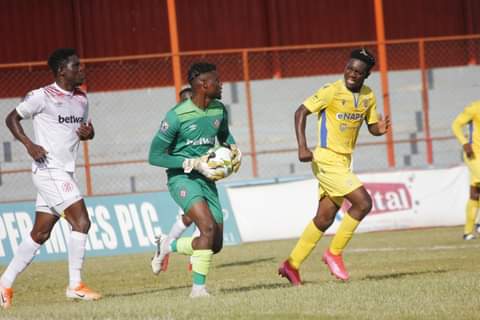 Nkana, who are third from bottom with 31 points from 28 games, are an improved side under coach Beston Chambeshi.

He has  posted two wins and one loss since he replaced Kelvin Kaindu a few weeks ago in the hot seat.

During the game, Napsa gave false hopes when they scored the opener through Jimmy Mukeya in the 14th minute.

However, Duke Abuya brought Nkana level in the 38th minute before Diamond Chikwekwe put the outgoing champions in the lead with a fine finish in the 46th minute.

Two became three for Nkana when Gilroy Chimwemwe grabbed his goal in the 59th minute.

Finally, Alex Ng’onga scored the fourth for Nkana with eight minutes to full-time.

It was his third goal in the last three games and killed off the game as a contest.

Down the table, Kitwe United anchor the table with 17 points earned from 30 matches after losing 0-1 to Lusaka Dynamos.

In another game, a double from Anos Tembo and another strike from Amity Shamended handed Green Eagles a comfortable 3-0 win over Indeni FC.

Up the table, Zesco United lead the table with 55 points from 27 games. Zanaco are on second place with 50 points from 30 matches.