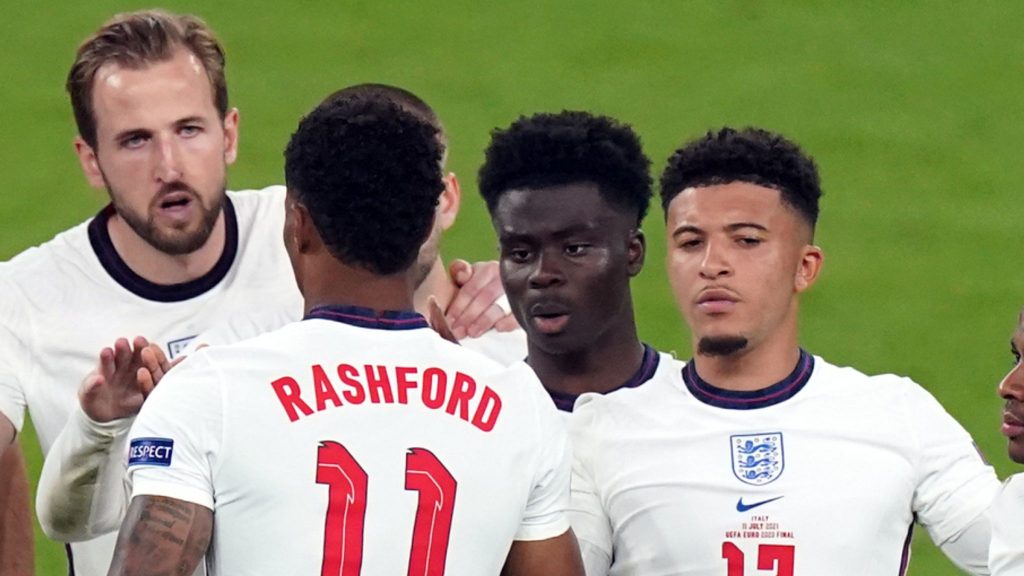 It is sickening that whenever players of African descent score for England they are embraced as genuine English players, yet when they fail, they are subjected to abuse based on their skin colour. Completely nothing to do with football.

The same was the case when England lost to Italy on post-match penalties in the final of Euro2020 at a chaotic Wembley Stadium on Sunday night.

Barely a few days ago, the very same fans were hailing Saka for his fantastic displays in the colours of the Three Lions at such a tender age of 19.

It is not clear as to where Rashford and Sancho’s roots in Africa are from, but the Arsenal rising star Saka’s parents are said to have originated from Ghana.

At one time, the FA of Ghana tried to entice the player but he opted for the Three Lions. Now this is the ‘thank you’ he gets.

Should Saka be regretting for choosing England instead of Ghana just because of one penalty miss?

How can one missing a penalty be linked to his skin colour?

It is common knowledge that even football superstars such as Cristiano Ronaldo and Lionel Messi miss penalties.

If anything, the critics must first fault England Manager Gareth Southgate for his ill-timed decision to choose the relatively inexperienced trio to take the penalties instead of the likes of Luke Shaw and Raheem Sterling.

Afterall, Southgate has taken responsibility for his gamble in the selection of the penalty takers.

“In terms of the penalties, that’s my call,” Southgate told BBC. “It totally rests with me.

“I decided on the penalty takers based on what they’ve done in training, and nobody is on their own. We won together as a team, and it’s on all of us for not being able to win the game tonight.”

In reaction to the abuse of the three ‘Africans’, the England Football Association has released a statement.

“The FA strongly condemns all forms of discrimination and is appalled by the online racism that has been aimed at some of our England players on social media.

“We could not be clearer that anyone behind such disgusting behaviour is not welcome in following the team. We will do all we can to support the players affected while urging the toughest punishments possible for anyone responsible,” the statement reads.

However, such a statement is not enough. More is needed to transform the game and rid it of such bad elements.

There is need for more inclusion at all levels of the English game, including in coaching to have managers of other backgrounds so that there is acceptance.

What explaination does the Premier League have that for all the many great black players few or none of them have translated into coaching at the highest level?

In the case of the English players of African origin, reggae star Peter Tosh was perhaps right that: “No matter where you come from / As long as you are a black man/ You are an African.”