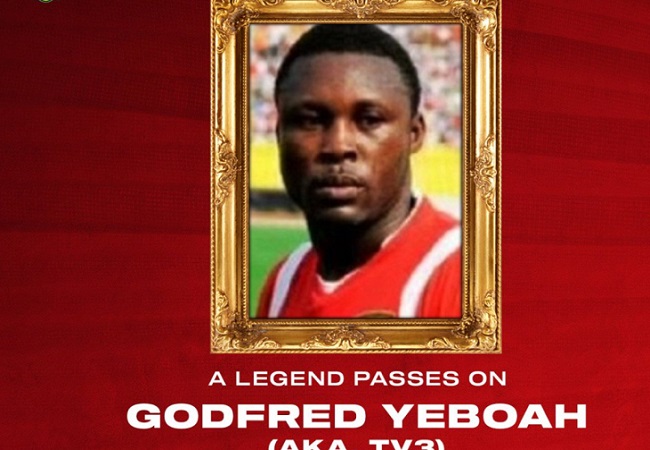 Former Kumasi Asante Kotoko left back Godfred Yeboah, famously known as Tv3, has passed away in the early hours of Tuesday, August 3, 2021 in Sunyani. Godfred Yeboah died at the age of 41 after a short illness. His former club, Asante Kotoko, confirmed the sad news in a tweet on their official handle.

“We’re saddened to hear of the passing of Godfred Yeboah who represented us from 2001 to 2009. His passion for the club was undeniable. And he will be missed. We send our condolences to his family, friends and everyone who cherished him.” Wrote the club.

The death of the defender has sent shockwaves across the country with fans of the player and the club reacting to the sad news.

“News In : Former Asante Kotoko defender Godfred Yeboah TV3 has been confirmed dead after a short illness.” Wrote the supporters union of the club.

The Professional Footballer Association of Ghana were saddened by the news, sending their condolences to the family of the player

“The PFAG mourns the death of ex-Asante Kotoko defender Godfred Yeboah who died after a short illness. Our thoughts are with the family & the entire Kotoko fraternity at large. We stand on behalf of all our professional footballers in wishing eternal rest for Yeboah.” Wrote the PFAG.

Yeboah played for Asante Kotoko between 2001 and to 2009. And was a member of the team that reached the final of the CAF Confederation Cup in 2004.