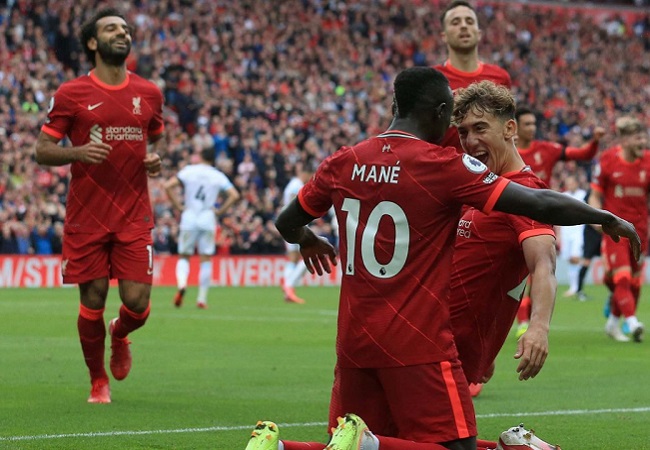 Tsimikas received a counterattack ball on the left flank and crossed it to Diogo Jota in the near post who headed it past Burnley goalkeeper Nick Pope.

Two minutes later, Salah took a powerful shot from the edge of the penalty area. But Pope was able to parry the Egyptian’s effort.

Then in the 26th minute, Harvey Elliott played a through ball to Salah, who put the ball into the back of the net. But the goal was ruled-out for offside.

In the 31st minute, Trent Alexandre Arnold played a chip pass to Sadio Mane. But the latter’s effort went over the crossbar.

It didn’t take long for Burnley to threaten the Reds’ goal at the start of the second-half. Ashley Barnes smashed the ball from close range in the 46th minute. But his goal was disallowed for offside.

In the 60th minute, Salah chested Tsimikas’ cross down inside the penalty area. And he brilliantly got past the Burnley defender. However, his shot was cleared off the line.

Then in the 69th minute, Sadio Mane doubled the scoring for the hosts following a brilliant build-up which started with Virgil Van Dijk who found Harvey Elliot on the right wing. The 18-year-old then passed it to Trent, who played a quick pass to the Senegal international and the latter smashed it into the back of the net.

With this win, Liverpool now have six points from a possible six after they beat Norwich in the opening game week last weekend. Their next game will be next Saturday against Chelsea at Anfield.