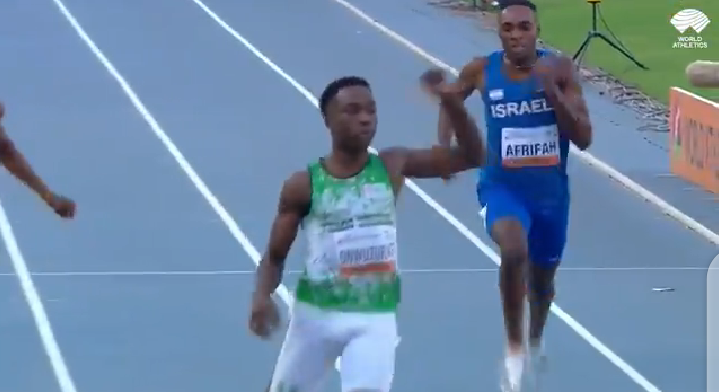 Udodi Onwuzuruike said it felt amazing to put his rough years and injuries behind him to win a gold medal at the ongoing U20 World Athletics Championship.

Since arriving Nairobi for the junior Athletics Championship, Onwuzuruike has been in a class of his own.

The 18- year old who is making his debut for Nigeria in his career had the fastest time of all the heats (20.47) and stormed to a fast 20.13 in the semifinals which would have been a championship record but for the wind (2.4m/s).

At the finals, men’s 200m, he was quick out of the blocks and came off the bend before everyone else, coasting home to gold with a Nigerian U20 record of 20.21.

He became Nigeria’s first 200m gold medalist at the World U20 Championships since 1996 when Francis Obikwelu won the sprint double.

Speaking with worldathletics.org Onwuzuruike whose father was at the Stadium to watch him, said he felt so amazed.

“It feels amazing. I had a very rough year and had injuries numerous times.

I feel like my numbers weren’t really good and showing what I’m capable of, so coming out to show on the global stage that I’m the best is amazing.”

His gold medal saw Team Nigeria moved to third on the medal table with three gold and two bronze.