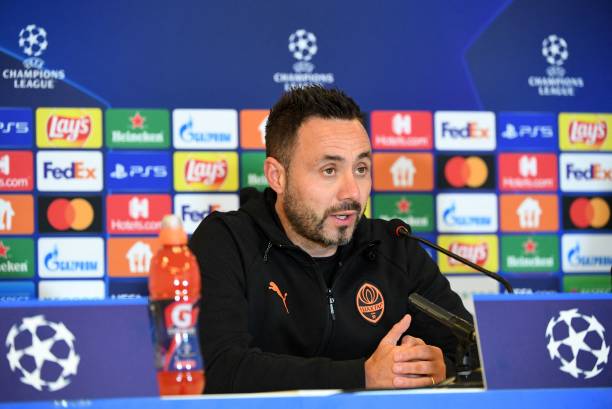 Shakhtar Donetsk put in a very solid performance against Inter Milan in Ukraine to pick their first point.

Both teams headed to the game on the back on the defeat from the opening Group D games.

Shakhtar suffered a 2-0 loss to debutante, Sheriff in Moldova while Inter Milan lost 1-0 to Real Madrid in San Siro.

Both teams needed the victory but ended sharing the points with Inter Milan failing to make their possessions count.

speaking in his post-match conference, De Zerbi said; “We created a lot of chances to score, and overall my players gave an impressive performance.

“The entire team team played excellently so I don’t think we have to highlight just Pyatov tonight.”

“I think Inter had a stronger mentality than us.

” Even when Shakhtar had more possession of the ball, Inter were patient and created problems for us.

” It shows how strong they are in terms of mentality and I think we can be satisfied with this draw.”

“I think both teams played some great football. [Following Traoré’s substitution] Pedrinho had to play as a striker and he put some incredible performance, so did Tetê.

“Who knows what result we would have got with Traoré on the pitch.

“It’s such a pity that he suffered this difficult injury.

“It’s always pity when such young and talented players get these kinds of injuries.”