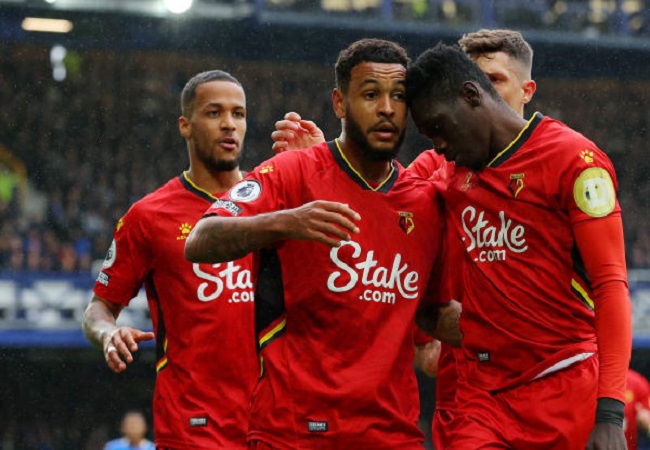 Super Eagles forward Emmanuel Dennis delivered an impressive performance to help Watford come from behind to stun Everton 5-2 at Goodison Park on Saturday.

Dennis scored one and contributed another two assists as manager Claudio Ranieri secured his first win as manager of Watford.

William Troost-Ekong was the only Nigerian international who started the game, with Alex Iwobi and Dennis coming off the bench in the second half.

Josh King would make the headlines after netting a hat trick. But Watford were losing 2-1 when Dennis was introduced after the hour-mark for the ineffective Ismaila Sarr.

And the Nigerian forward brought more spark to Watford’s attack and fired a cross-pass to King to net his second goal of the game in the 80th minute to give the visitors their first lead of the afternoon. Juraj Kucka had made it 2-2 for the Hornets two minutes earlier.

Dennis could have extended Watford’s lead shortly after. But his well-struck drive came off the foot of the post with the goalkeeper well beaten.

Still, Dennis kept nibbling at it, and he was rewarded with another assist as King made it 4-2 for Ranieri’s men in the 87th minute.

Dennis eventually got the goal his performance merited in stoppage time, feinting past an Everton defender before stroking the ball expertly into the net to seal Watford’s first-ever EPL win at Goodison Park.

It is an excellent response from the Hornets, who shipped five goals against Liverpool last weekend in Ranieri’s first game in charge.