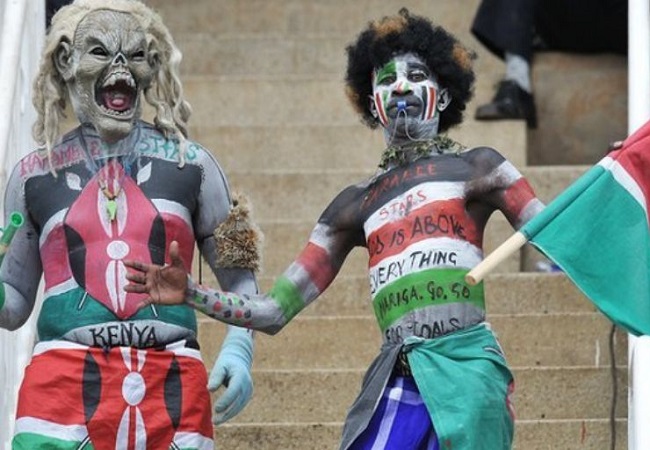 Kenya President Uhuru Kenyatta has made football followers happy after lifting a dusk-to-dawn curfew during Mashujaa Day celebrations. The President announced that football fans will be allowed back into stadiums to watch matches.

From March 2020 when the first Covid-19 case was reported in Kenya, matches in the popular Kenyan Premier League have been played behind closed doors with a few being streamed live on television.

It was a challenging time especially for the two most successful league teams rivals Gor Mahia and AFC Leopards, who depend on gate collections.

Jaro Soja, the self-proclaimed “Commander of the Green Army”, welcomed the news.

“Having many Gor branches is good for the growth of the game. It broadens the fan base.” Said the ardent K’Ogalo fan, whose real name is Jared Otieno. He had turned to making face masks to eke a living.

“Ingwe” diehard Isaac Juma, said that he had missed the Isukuti beats and his favourite team AFC Leopards.

“I made most of my friends in the stadium during matches. But now, we only meet online to discuss football matters. On weekends we did not have anything to do.” Juma lamented.

“Attending matches is important. It relieves stress. We’ve been unable to go out and have fun with our football friends.” He said.

Inea Mukaisi, an AFC drumist with a powerful melodious voice was had hit. Mukaisi, who also used to perform at events such as weddings, moved to his rural home in Kakamega in 2020.

“The pandemic hit me hard. I didn’t have crowd to perform to. And I returned to the village. I got to a point where I could not pay house rent.” Said Mukaisi.

He said tokens from politicians and fans dried up, and so did his pocket.