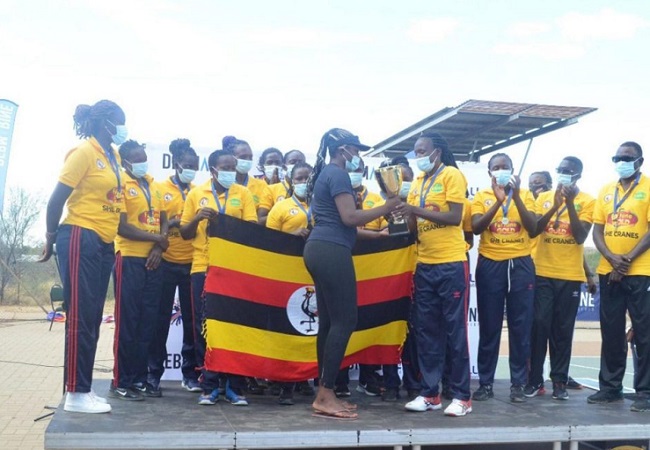 Uganda national netball team, She Cranes has been crowned champions of the Africa Netball 2021 Pent Series in Windhoek, Namibia.

Uganda had another good performance against hosts Namibia, winning all quarters played. The first quarter ended 16-10 before adding 12 to go into halftime with a 28-16 victory. In the last half, She Cranes continued dominating and ended quarter three with a 44-23 before completing the game with a 56-37 victory.

The She Cranes had an impeccable performance earning all the maximum points needed in the tournament. Before defeating the hosts, She Cranes had already completed four victories against Zimbabwe, Zambia, Malawi and Kenya.

The five-day event that ended November 5 will then pave way for the Africa Netball Championship scheduled for November 10-16 still that will be held at the Israel Patrick Iyambo Police College in the Namibian capital.

The tournament’s inaugural kick-off was in 2017 where Zimbabwe won the first edition, while Namibia won in 2018. For the past two years, the tournament has not been taking place due to the outspread of Covid-19. The Pent Series are intended to improve rankings as teams bid to secure slots for the 2022 commonwealth games.

Meanwhile, this is Uganda’s first time to win the championship. This will be a good start for team Uganda as they head into the African championship.