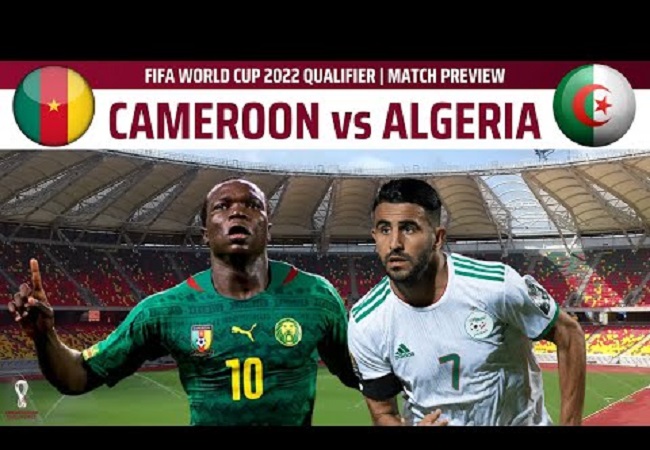 Cameroon and Algeria are hours away from their major first led clash of the World Cup qualifiers. The Indomitable Lions will host the Fennecs at the Japoma stadium of Douala with game kick-off at 17:00 GMT.

Cameroon are seeking to reach the World Cup finals for the eighth time in their history, while Algeria go in search of their fifth appearance at this level.

Algeria ended their Group A qualifying campaign unbeaten, picking up four wins and two draws to finish as group winners ahead of Burkina Faso.

However, The Desert Warriors could only muster a shambolic defence of their Africa Cup of Nations title, as they crashed out in the group stages.

Djamel Belmadi’s men were a shadow of themselves in Cameroon and finished with just a single point from their three outings against Ivory Coast, Sierra Leone and Equatorial Guinea.

Cameroon saw off the threat of Ivory Coast in their final Group D fixture, which saw them emerge as group winners with a tally of 15 points from a possible 18.

Rigobert Song’s men finished as second runners-up in the AFCON. But they would have been disappointed not to have gone all the way on their own turf.

No team in the entire continent has been to more World Cup finals than the Indomitable Lions, whose streak of four consecutive appearances is also unmatched.

Like their visitors, Friday’s hosts also did not participate in Russia four years ago. And the Lions will be keen to confirm their place in Qatar this time around as the stakes are high.

Vincent Aboubakar scooped the AFCON Golden Boot award with eight goals in seven games. And the forward is certainly one to look out for.

Swansea City’s Olivier Ntcham has received his maiden call-up to the Cameroon national team despite representing France at youth level.

Thirty-five-year-old Rais M’Bolhi is closing in on 100 appearances for Algeria as he seeks to join Lakhdar Belloumi as the only men to have reached the milestone.

Riyad Mahrez was largely underwhelming back in January. And his nation will need him back to his best if they are to emerge victorious in this one.