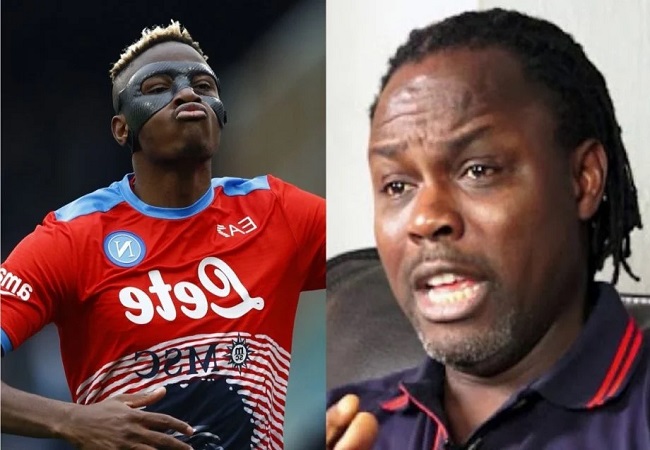 Former African Footballer of the Year, Victor Ikpeba, criticized the Napoli striker Victor Osimhen for attempting to score a spectacular goal during the World Cup playoff against Ghana at the National Stadium in Abuja when Nigeria failed to qualify for the 2022 World Cup.

Monaco’s all-time top scorer in European competitions with 14 goals, felt that the Super Eagles number nine should have controlled the ball first before hitting target rather than taking bicycle kicks that yielded no results.

Ikpeba has reiterated that Osimhen is still not the finished article and advised the striker to emulate humble Liverpool duo Mohamed Salah and Sadio Mane.

“I have seen the timeline of what happened, I can be the father to the young Victor. I have seen Victor before, very modest good young lad.” Ikpeba said in a telephone conversation with Channels TV Sunday Sports on Sunday afternoon.

“A lot of things came to play, sometimes players can take decisions because of emotions and respond so I’ve really moved on.

“Victor is one of those players that has a lot of character. He still needs to grow up, he’s not yet the finished article, he’s going to be one of our top players in the future. But he needs to humble himself and try to learn.

“It’s a learning process, he knows how many years it took him to be in Napoli. So my only advice to him is to look at the way the likes of Salah, Mane carry themselves and concentrate on his footballing career.”

Osimhen started and was in action for 83 minutes as Napoli lost ground in the Italian Serie A title race after a 1-1 draw with AS Roma at the Diego Maradona Stadium on Monday evening.