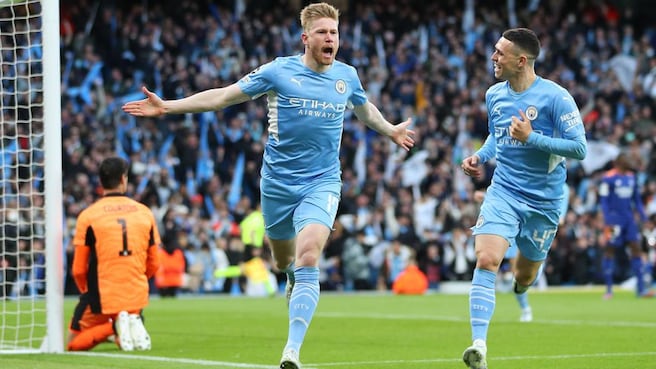 Manchester City will return to the UEFA Champions League semi-finals with a 4-3 lead over Real Madrid after one of the best meetings in the competition.

Carlo Ancelotti’s team would have known what was in store for them in Manchester, but they were unable to handle the energetic hosts early on.

Riyad Mahrez weaved through from the right touchline and crossed for De Bruyne to head in inside two minutes.

The Belgian schemer was at his best, turning provider and crossing for Gabriel Jesus, who twisted David Alaba before sweeping in the second goal.

As Madrid appeared punch-drunk, Mahrez should have made it three, and Phil Foden shot wide.

That was, however, when they were at their most threatening, as they were against Chelsea in their previous European game. Karim Benzema stepped up once more, this time heading Ferland Mendy’s cross in off the far post for his 40th goal of the season in all competitions.

After the break, the teams continued to slug it out, and chances poured freely once more. Foden made it 3-1 from Fernandinho’s superb cross, but City’s delight was short-lived as Vincius unior escaped Fernandinho inside two minutes on his way to a fantastic solo effort.

Neither side was willing to budge. Bernardo Silva was the next to score, slamming a 20-yard drive past Thibaut Courtois, but Pep Guardiola’s side could not maintain their two-goal lead, as Aymeric Laporte’s mistake gifted Benzema the chance to become the competition’s outright top scorer this season.

The French striker’s Panenka penalty summed up a thrilling match, with the second instalment set for next Wednesday at the Santiago Bernabéu.