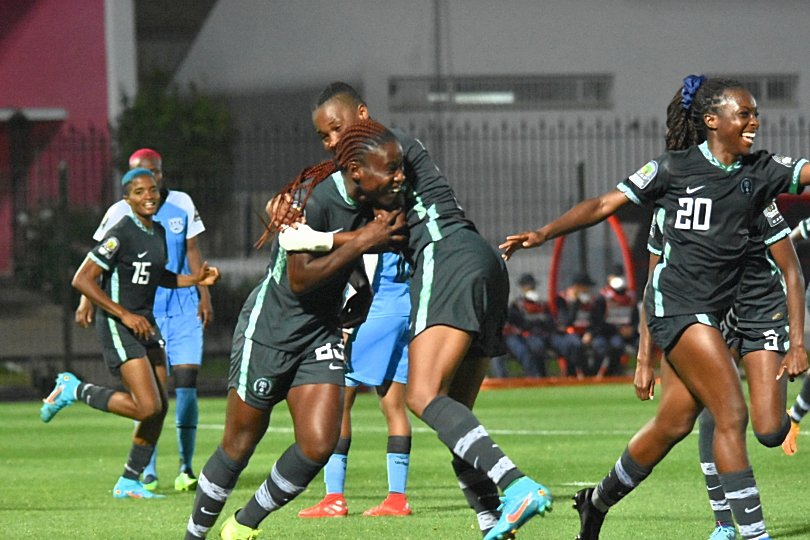 Super Falcons of Nigeria got their first win in the WAFCON 2022 following a 2-0 victory against Botswana on Thursday.

The wounded Falcons came all out against debutante Botswana in the second Group B game after they loss 2-1 in the opening game against South Africa.

Termed one of the favourite to win the title, Nigeria headed to the game putting behind them the loss to the Banyana Banyana.

Read Also:WAFCON 2022 Video: Nigeria Lead In First Half Against Botswana

With top striker, Asisat Oshoala already ruled out of the competition through injury, head coach Randy Waldrum made three changes to the team that loss to South Africa.

The trio of goalkeeper, Chiamaka Nnadozie, Ngozi Okobi and Francisca Ordega were handed a starting place.

Both teams sized each other in the first ten minutes of the game but it was the Falcons forward that were more offensive.

Ifeoma Onumonu broke the deadlock in the 20th minute to give Nigeria a breather as they goal gave them dominance over the Mares of Botswana.

Botswana almost leveled in the 32nd minute but Nnadozie brilliant save denied the debutantes.

Nnadozie was again called into action in the 38th minute as she pulled another save to keep the score line 1-0 heading to the break.

Ucheibe within a minute of her introduction into the game, doubled the lead for Nigeria as she headed a corner kick to make it 2-0.

She almost got a brace and Super Falcons’ third of the game but her effort went wide in the 52nd minute.

Botswana on the other hand never relented as they kept asking but could more get the answer they needed.

With the victory, Nigeria are back on track in their quest to win the WAFCON title for a record ten time.

Their last Group C game will be against Burundi on Saturday.

The TotalEnergies Africa Women’s Cup of Nations will also serve as qualifier for the Women’s FIFA World Cup Cup as the semi finalist teams will represent the continent.