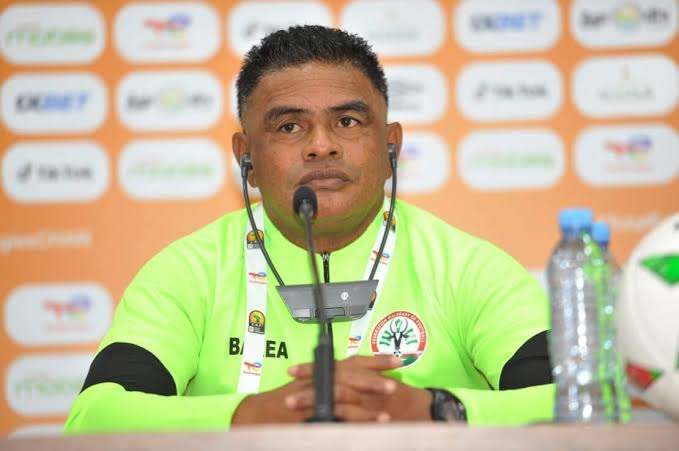 Rakotondrabe Felix Romuald, the coach of Madagascar, claims he never had any concerns about his team’s ability before the 2022 TotalEnergies African Nations Championship CHAN in Algeria.

In their first effort, the Barea defeated Sudan 3-0 on Monday at the Mohamed Hamlaoui Stadium in Constantine to win Group C and advance to the quarterfinals of the competition.

Madagascar is taking part in the competition for the first time, but according to their trainer, they are optimistic about their chances.

“Before the start of the tournament I never had doubts about my team.

“I was worried about this game today because I watched Sudan against Ghana.

“All glory to my players,” Romuald told the press in Constantine.

“We had a good first half.

“The players did well. I am very satisfied with my players today.

“Our next game is against Mozambique.

“I have watched a few of their games on television.

Even though Mozambique advanced to their first quarterfinal and finished second in Group A, the Barea is not complacent despite Group C’s dominance.

“Mozambique finished second behind Algeria. It was a very difficult group with Libya and Ethiopia.

“We are prepared and have the advantage of staying here in Constantine.

“I hope the supporters will stand by us in the next match.

“We slowed down in the second half because we wanted to rest our players, especially our central defenders given we were leading by three goals in the first half.

When asked if Madagascar now stands a chance to challenge for the trophy, Romuald was keen to be humble.

“It’s too early, we are in the quarter-final. We focus on that first.

“It’s not because we won two games that we will talk about winning the trophy.

“We stay humble and remain focused on the next match.

“As we did today and in the game against Ghana, psychological preparation is key.

” It’s not easy for the players. To some it’s the very first time at this level, so we are doing our best to help them adapt.

“We went to Tunisia to prepare. We camped from December in Madagascar.

” I hope we continue in this manner. First we celebrate the win tonight, then turn our focus to the preparations for the quarter final.

Over the past few years, malagasy football has steadily increased in popularity.

“Their CHAN squad is performing well, following the success of their senior national team, which advanced to the quarterfinals of the 2019 TotalEnergies African Nations Cup in Egypt.

“True, our first team reached the quarter-final of the AFCON.

“It’s the fruit of a lot of work back at home. Looking at our background we have always been eliminated from the start so we have had to do a lot of work to get here.”