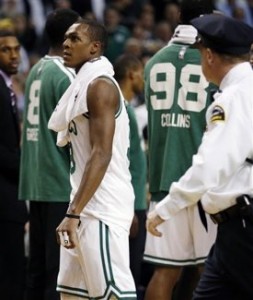 The NBA on Thursday doled out its punishment for Wednesday night’s scuffle between the Nets and Celtics in Boston, with Boston’s Rajon Rondo getting hit the hardest.

Rondo was suspended two games without pay for starting a fight with the Nets’ Kris Humphries near the end of the second quarter. The Celtics’ Kevin Garnett was slapped with a $25,000 fine and Nets forward Gerald Wallace was fined $35,000, both for “escalating the altercation,” according to the league.

With 29.5 seconds left in the first half, Humphries fouled Garnett as he drove to the basket and Rondo didn’t like it. He immediately got in Humphries’ face, shoving him and starting a melee that spilled into the stands directly behind the Celtics’ basket.

Rondo was ejected, as were Humphries and Wallace because they picked up their second technical fouls.

Nets general manager Billy King wasn’t pleased when he learned of Wallace’s fine. He preferred to keep the conversation he had with NBA vice president of basketball operations Stu Jackson private, but they didn’t exactly see things eye-to-eye.