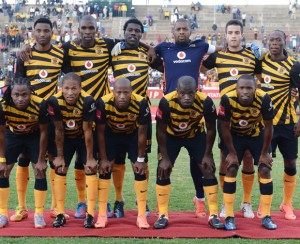 Kaizer Chiefs bounced back from their first League defeat of the season by thumping Ajax Cape Town 3-0 on Tuesday. The pressure was on both teams to produce a result, with Chiefs aware that they could not afford another setback ahead of the Soweto Derby this weekend, while Ajax wanted to build on their Cape Derby victory, having ended a four-match winless run against Chippa United.

The opening 20 minutes of the encounter were met with an air of intensity and high rivalry between the two teams, with Matthew Booth threatening with a header and Kingston Nkhatha watching a shot go wide.

The duo were having their own personal battle on the field and it continued until Ajax nearly found the opener when Khama Billiat forced Itumeleng Khune to make a fantastic save on the half-hour mark.

Chiefs, however, pounced on the counter-attack two minutes later, and they capitalised on the lack of pace in the Ajax squad.

Bernard Parker, who had not scored since September, struck a snap-shot from 18 metres, which sailed into the net after taking a deflection off Booth.

Nkhatha continued to cause trouble for Ajax’s defence in the second half, and just before the hour mark he got the ball in the net, only for it to be called offside.

Bradley Grobler was brought on in the hope of pulling a goal back for the Urban Warriors, but he found himself facing a bigger task when Chiefs made the scoreline 2-0 in the 64th minute.

Siboniso Gaxa was supplied a neat ball at the corner of the box, made a clever run into the box and fired a sneaky shot between Sander Westerveld’s legs at the near post.

There was little Ajax could do to contain Chiefs, and Siphiwe Tshabalala put the scoreline beyond doubt with a powerful 25-metre shot, which struck the back of the net with some force to make it 3-0.

Ajax’s horrible night was summed up when Nhlanhla Vilakazi, who had only been on the field for 15 minutes, needed to be replaced after picking up a knock.